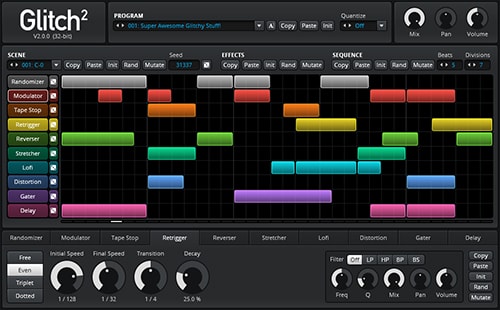 The infamous FSU plugin is back! And yes, there’s finally a Mac version!

Glitch is an audio effect plugin for Windows (VST), Mac (VST and AU) and Linux (VST), available in both 32-bit and 64-bit formats. Featuring a new and improved sequencer which can play multiple effects simultaneously, with the ability to trigger unique scenes from every note on your keyboard, Glitch can be as gentle or as brutal as you like.

Add the occasional splash of retrigger or stretcher to single hits within your drum loop, or fill the entire sequencer with random effect blocks for a totally chaotic trip down the digital rabbit hole… the choice is yours!

Features at a glance

Randomize and Mutate functions can be found at almost every level. Mutate a single effect to get slightly different parameter variations, or instantly Randomize everything in the entire scene to create unexpected, chaotic and inspiring results!