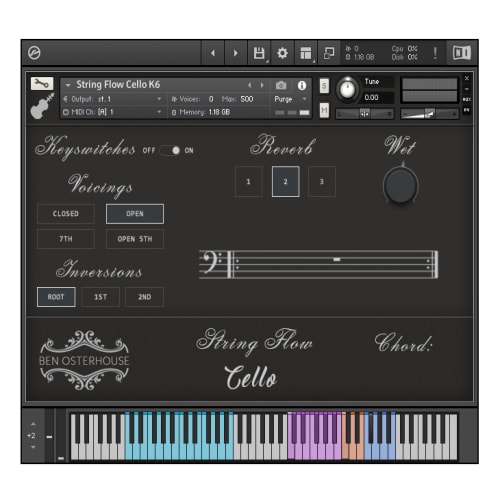 String Flow Cello samples a technique string players use, in which they quickly roll the bow across the strings to create an energetic, chordal texture.

There are 2 ways to play the instrument.

The first way is simple: just choose what type of chord you want, what key to be in, and then play on the white keys. Whatever you play will pick a harmony which will fit into whatever key you’ve chosen. It’s kind of like the “Harmonize” factory scripts in Kontakt, except that in this case, all of the harmonies had to be manually recorded!

The second way to play requires more knowledge of the instrument, and is more flexible. If you play a chord that has been recorded, the instrument will play that chord on viola.

The midi clips which come with the instrument demonstrate which chords work.

Works with the FULL version of Kontakt 5.8.1 and Kontakt 6. Do not purchase this if you only have Kontakt Player.