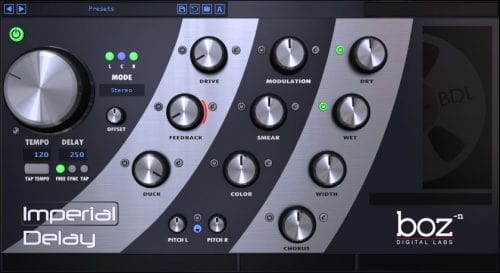 The Imperial Delay comprises a highly versatile dual-layer delay with multi-effects, giving you a range that can go anywhere from smooth and warm vintage delay to Gremlins from hell, or the far reaches of outer spatial.

In the tradition of everyone’s favorite studio gear, Imperial Delay gives you maximum sonic possibilities with a minimum of knob twiddling. While the GUI of Imperial Delay is simple and straightforward, it offers far more creative options than its streamlined front panel suggests. Since Imperial Delay can function as both a delay and multi-effects processor, it’s designed to draw minimal CPU power, which enables multiple instances—something that will come in very handy if you want to dedicate its various capabilities to specific applications such as a lead vocal delay, stereo widening effects, modulation and color, and detune and chorus effects. You can also use it as a distortion generator, or throw caution to the wind and create effects previously unheard by human ears.

The Delay knob is where the royal edicts of Imperial Delay are carried out. Delay modes include Sync, which tracks your DAW project tempo displaying note values (including triplets); Free lets you dial in a delay value from 0.1 to 10s; and Tap lets you tap in a value in the absence of a DAW tempo setting. There is also independent L-C-R channel activation with a mode display. If you click on the mode display, it offers six options, including standard stereo mode; left/right swap; two mono modes; and two ping pong modes.

Rather than split the interface into two sections with duplicate controls when you select stereo or ping pong modes, Imperial Delay has a simple Offset control that, as its name implies, lets you offset the left and right channel delays (right channel only). Once set, the offset maintains at the same ratio regardless of the main delay setting. For example, with the delay knob set at 344ms with a 10ms offset (354ms right), if you change the main delay setting to 244ms, the right channel will be 254ms, maintaining the 10ms offset.

Controls for sound design and effects include:

While the main control display is easily discernable to those who prefer to forge ahead without reading manuals, there are some hidden gems in the advanced settings windows, which appear at the selection of button labeled “e.” Advanced settings are available for Drive, Feedback, Modulation, Smear, Color, Chorus, and Duck. When the edit button is selected, the relevant controls appear along with a presets button that gives you an idea of the possibilities the advanced section can give you, along with the ability to save your custom presets in submenus. There are also some hidden gems in the advanced modes, such as the ability to select a chorus effect with 2, 4, 8, or 16 voices. (So break with tradition and read the manual.)

The Pitch function of Imperial Delay also gives you the ability to independently detune left and right channels. It can create interesting effects, as well as doubling. In subtle amounts, it enhances stereo width without phase issues. In fact, when used with the Chorus effect, you can duplicate the Stereoizer* effect found on the tc electronic System 6000 mastering reverb (saving you around $13,000).