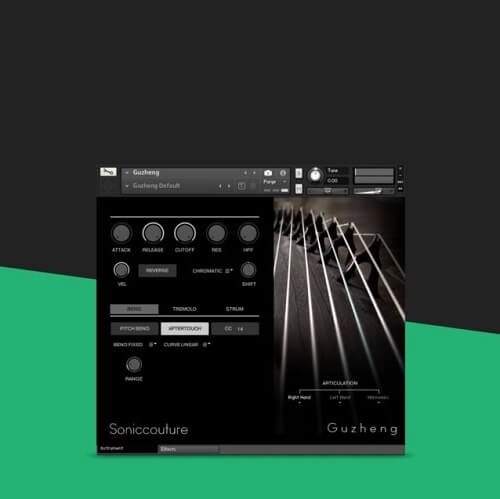 The Guzheng is a traditional Chinese instrument dating from the Qin dynasty (c. 200 BC to the rest of us). It is the ancestor of the Japanese Koto as well as several other zither-like instruments found across east Asia.

A modern Guzheng typically has 21 strings over movable bridges, and steel strings wound with nylon, although ancient instruments used silk strings. These are mounted on a large resonant half-tube box made of wu-tong wood, and the instrument is typically about 1.7m long. The strings are tuned by both moving the bridges and by adjusting tuning pegs.

Generally the notes are plucked with the right hand, on which the player wears tortoise-shell finger-picks. The left hand is usually bare, but sometimes used to pluck accompanying notes as well as providing pitch bend and vibrato effects behind the bridge. Sometimes virtuoso performers will use finger picks on both hands. Other playing techniques include tremolo (very fast repeated notes), harmonics, and sweeping glissandos.

The SC Guzheng has been extensively recorded in 24 bit 44.1khz stereo. Three articulations were sampled: right hand (finger picks), left hand (flesh), and harmonics (finger picks). Up to ten velocity levels, three round robin alternations for the right hand, and two round robin alternations for the left hand. This ensures natural attack transients with no ‘machine-gun’ repetition.
Across all 21 strings this amounts to 1027 samples totaling just over 2 gigabytes. We provide a method to play the Guzheng in it’s original tuning, or in chromatic tuning, for each format.

The Kontakt version of Guzheng contains extra tools for recreating the natural response of the instrument.

Pitch Bend Processor – This acts on the last note played only, and can be controlled via Aftertouch or another MIDI controller. The pitchbend note can also be set to end on a note within a scale of your choosing.

Glissando Processor – This tool allows you to ‘strum’ the entire Guzheng, and define the range,velocity and other parameters.

Tremolo Processor – Another characteristic technique of Guzheng playing is tremolo. Virtuoso players are able to repeat notes very quickly with just their right thumb, while continuing other parts with the remaining fingers and left hand. This tool allows you to set up and define a Tremolo behaviour that can be switched on or off with a key or controller of your choice.