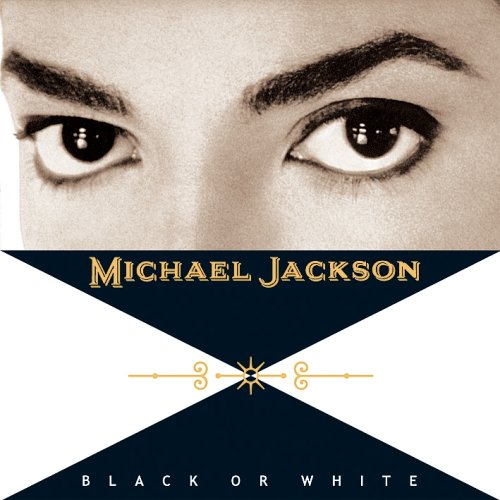 “Black or White” is a single by American singer and songwriter Michael Jackson. The song was released by Epic Records on November 11, 1991 as the first single from Jackson’s eighth studio album, Dangerous. It was written, composed and produced by Michael Jackson and Bill Bottrell.

“Black or White” was written, composed and produced by Michael Jackson and Bill Bottrell,[1] and was picked as the first single from the album Dangerous. An alternate version was first heard by Sony executives on a plane trip to Neverland, as the third track of the promotional CD acetate. It began to be promoted on radio stations the first week of November 1991 in New York and Los Angeles.”Black or White” was officially released one week later, on November 5, 1991.

The song has elements of dance, hip hop and hard rock music such as Bill Bottrell’s guitars and Jackson’s vocal style. This song is played in the key of E major, with Jackson’s vocal spanning from E3 to B4, and its tempo is measured at 115 BPM.

The song’s main riff is often incorrectly attributed to Guns N’ Roses guitarist Slash. His guitar playing is actually heard in the skit that precedes the album version of the song.Slash did, however, play the main riff during live performances of the song.

The vocal melody of the verses has been compared to that of the Duran Duran song ‘Hungry Like The Wolf’.

The music video for “Black or White” premiered on MTV, BET, VH1, and Fox (giving them their highest Nielsen ratings ever at the time) as well as the BBC’s Top of the Pops in the UK on November 14, 1991. Along with Jackson, it featured Macaulay Culkin, Tess Harper, and George Wendt.The video was directed by John Landis, who previously directed Thriller. It was choreographed by Vincent Paterson. It premiered simultaneously in 27 countries, with an audience of 500 million viewers, the most ever for a music video.