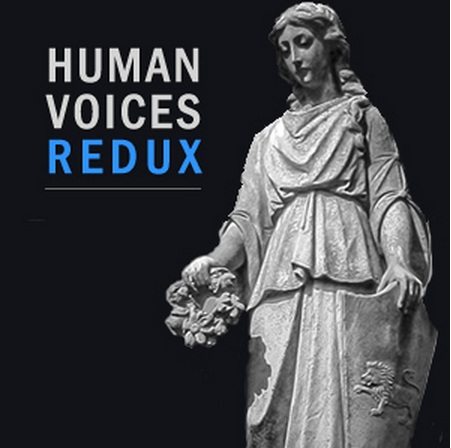 Hidden in plain sight within Omni are some brilliant vocal sample sets. Prime among them is the famous Symphony of Voices with its choirs, leads, sopranos, tenors, and Gregorian samples. Then there’s hundreds of world vocal sample sources from other sample libraries such as Heart of Asia, Heart of Africa and Vocal Planet. Add to that many more phrases, jazz, pop and processed vocal effects.

This huge resource is explored in Human Voices Redux. The prime mission was to make these samples fresh and to automatically output the variations and natural organic flucuations which make sampled choirs sound more realistic. So with Redux I was always modulating parameters and adding subtle randomizations.

This set was a huge amount of fun. The video below is a no-talking run through of the entire 120 patches. Open up the video info to jump to time stamps of different categories. At least have a listen to the drum arpeggios – not what you’d expect from a voices set and crazy fun. To read more, scroll down past the video.

Omni also contains a huge set of melodic vocal phrases. Normally they’re unusable except at their root pitch and speed. But with Omni’s new granular tools I took slices of the phrases, carefully retuned them, then varied parameters such as timbre and sample start. Finally there are the recently introduced digital vox waveforms, and they got a good showing here too.

But this is not an all-sweetness pad set. Of course there are many varieties of choir, but there’s also a big variety of leads, keys, effects and beatbox drums. Even within the vocal keys and pads categories there’s things like orcs, 50s sci-fi and K-pop.

And as deep as this set is, there are still more vocal sources buried inside Omni. For those who want to explore even further you can use the framework of envelope timings and randomized sample starts and timbres, and swap out the samples for more variations.

There are 120 patches made with Omni 2.6.0e using only core sound sources from 2.6.0c, and from one to four layers. There are no multis. There’s several reasons for that, primarily that I don’t like them. For me they make a patch unwieldy, difficult to modify and often too ‘directed’ as to form and style. More significantly, with the recently introduced four-layer format there’s a huge amount that can be done in a single patch. Have a look at the Drum Arpeggios in the video to see the pattern and note variations possible in a single patch using just the new arpeggiator features, LFOs, the modwheel and layers.

Programming was done on a modest i3 PC and no patches use quad resonators or Innerspace. Granular is extensively used but the i3 handled all patches very easily.
The modwheel is individually programmed in detail for every patch, but no aftertouch programming
Any extra ‘tail’ effects are typically on the Aux bus to allow for effects overlap when playing
The arp patches do not use any melodic lines, just octaves. It’s always best to make your owns riffs.
Patches are all tagged and categorized, with relevant notes on particular techniques which may be useful playing that patch

The patch names attempt to usefully describe the sound and include an end code indicating how the modwheel is programming, eg: “Lead – Gorgons and Orcs MW Distort” (A lead sound with the modwheel adding distortion).

All patches are carefully volume matched.