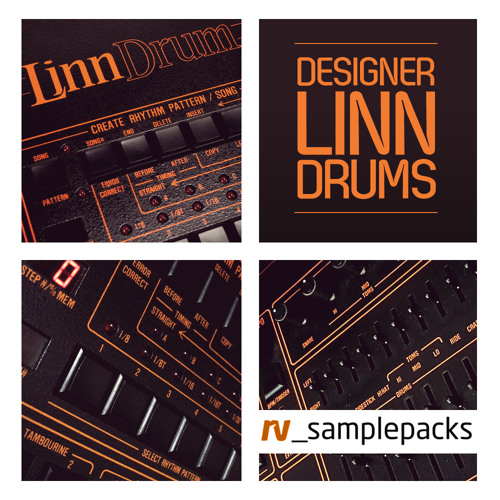 ‘Designer Linn Drums’ from RV Samplepacks bring you the best in electronic sounds with the ultimate source of enhanced samples from one of the most iconic drum machines of all time. Built for 21st century producers who need instant access to the vibe and feeling of the original, this pack remixes this classic machine for 2016 and beyond.

For this project, the iconic sounds of the Linn drum have been taken and used as the foundation for an all-new collection of production-ready drums, with over 650 individual hits. All the heavy lifting has been done for you, adding tuned subs to kicks, transforming stock snares into designer masterpieces, using gated reverbs, adding fat compression and sculpting new forms with custom envelopes. Each sample has been meticulously curated with a focus on clarity and authenticity with dance music producers in mind.

As used by the likes of Prince, Jean-Michel Jarre, Peter Gabriel, New Order and The Human Leaguem The LinnDrum provided rhythm tracks to many 1980s hit records and has carried on its legacy to the present day and beyond. It was the first drum machine to feature samples of a real drum kit, with five external trigger inputs and the ability to replace built-in sounds with new sounds on EPROM chips. The LinnDrum features kick, snare, side stick, open & closed hi-hats, crash, ride, toms, cabasa, tambourine, congas, cowbell, and claps.

This is the legendary sound of LinnDrum boldly going where it has never gone before. Check out the demo and get ready to feel the snap with RV’s ‘Designer Linn Drums’ today.