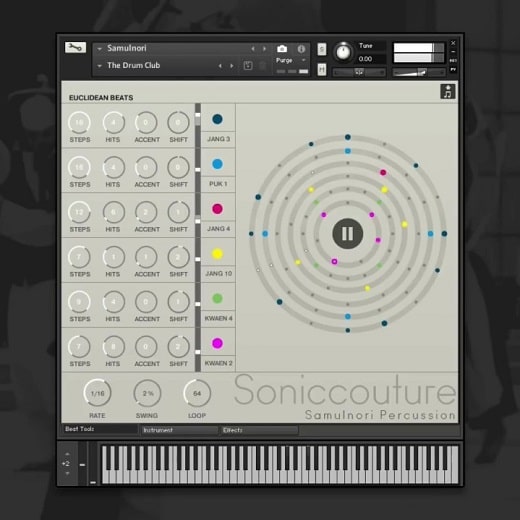 Samulnori is a type of Korean percussion music that has been gaining popularity over the last few decades, both in Korea and abroad. The term “samulnori” ( ) can be broken into two parts – “samul” meaning “four things”, and “nori” meaning “to play”.

The Samulnori ensemble generally consists of four main instruments : Puk, Janngu, Jing and K’Kwaenggwari. In a minimal ensemble there will be just one of each, but you will also sometimes see larger groups with four or more of each instrument. However, even in these larger groups, the role of each instrument is the same. Each one represents an element of nature, the Jing being the wind, the Janggu the rain, the Puk the clouds, and the K’kwaenggwari the lightning.

Samulnori has it’s roots in farmer’s music (nong-ak), and includes not only music but dancing to celebrate harvest times. The music also stems from the shamanistic tradition of utdari pungmul, which is performed on these same instruments together with singing and wind instruments. In it’s modern incarnation, samulnori relies solely on the four instruments below, either in quartet or larger ensemble.

Also known as ‘Buk’, this is a low a low pitched barrel drum, played with a single wooden mallet. It is about 30 cm in diameter, and made from a piece of hollowed out wood with a leather skin tied across each side.It provides the bass pulse of the grou

A gong made of iron. Sometimes hung on a frame, or else held by it’s handle, it’s generally played with a large padded beater. It can also be played with the hands.

An hourglass shaped drum, each side covered with a different kind of leather. One side produces a higher pitched sound and is struck with a thin bamboo reed, the other side is played with a mallet and produces a deeper sound.

A very small hand-held gong held in the left hand and played with a small hard beater. It’s about 25 cm across made primarily of brass. The left hand is also used to damp the gong. This instrument leads the group, signaling transitions in the music.

The Samulnori Kontakt instruments feature KSP Humanise controls which can be used to add random variations to the timing, velocity, tuning and volume of each hit.

This makes it possible to load up multiple instances of the same instrument playing the same MIDI pattern and introduce the natural differences and organic feel of a human drummer to each one. This makes it very quick to create stunningly lifelike ensemble percussion pieces.