InstaChord is a MIDI Processing Plugin that helps you play chords and chord progressions faster and easier.

The foundation of a great song is based on its harmonic movements and chord changes which often is called chord progression. . A change in chord progression can have a drastic effect on the mood or direction of a song. Even those with a background in music theory can experience repetition and stagnation. Using richer chords and new chord progressions can take the song to a new level and make it sound more unique and professional.

Whether or not you are an experienced musician or just a beginner, with a vast chord bank and amazing playability, Instachord has something to offer to you.

Find the chords that work well together and build a perfect chord progression for your next song with just a few clicks. You can transpose all the chords to any other key you want using the ‘transpose’ button.

In addition to having access to chords and being able to set a progressions, one of the other great thing about Instachord is it’s playability. 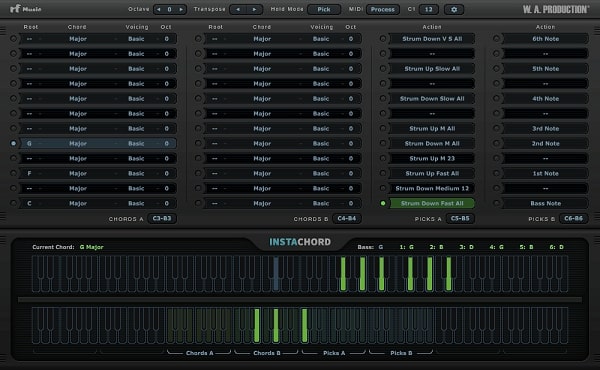 We have Included almost all the common chords (maj, min, sus2, 6th, 7th, etc) in 5 different voicing (basic, 1st and 2nd inversions, guitar and wide). Each voicing mode has a unique sound due to the order of notes and might be a better choice to fit with the other chords in the song.

There are a lot of ways that you can play the chords. You can Hit or strum the chords with different combination of notes, speeds and directions. For example a key can be assigned to strum top 3 notes of the chord and another one to hit 2 middle notes.

You can also play individual notes of the chord separately. So it’s possible to arpeggiate the chords or strum them manually as well.

This feature allows the fretting hand (chord changer keys) to control the sustain. So as long as the chord key is held down any note you play will ring out, just like a guitar or using a sustain pedal

Set up to 24 different chords and switch between them using the chord keys.

Set your own functions for the 24 action keys provided and tell them what you want them to do. Play a full strum, hit first two notes, transpose, etc.

Transpose the current chords to any other key you want with just a few click. This is also useful when playing live when the key of the song changes.

Endless possibility of customization for any kind of applications. Instachord is highly customizable and users can change things to match their needs.

Set your own favorite action key setup out of vast number of action options and lock it so it won’t change when loading a new preset.

The position of the chord and action keys on your controller, each in two separate octaves can be moved up or down placed in a more comfortable position.

Instachord is easy to install and use and has an a user friendly interface. But we wanted to make sure you get the most out of the plugin so we have made several tutorials that cover installing the plugin and setting it up on different operations systems and DAWs.

Instachord can be used on any software that supports VST or AAX plug-ins with MIDI routing or AU MIDI effect type. But to make sure it’s compatible with yours please try the demo version before you buy (only major chords are allowed in trial version).